As a city known for its stunning harbour, the River Avon, and the impressive Clifton Suspension Bridge, it’s hardly a surprise that there’s a wealth of cycle routes in Bristol, too.

In fact – Sustrans, the charity behind the National Cycle Network, was founded in the city in 1977 and has since created more than 12,000 miles of signed cycle routes and traffic-free paths across the UK.

There’s certainly no shortage of well-marked and well-maintained cycle routes in Bristol and across the old Avon region.

So, if you’re planning new routes to conquer, Bristol is well worth a visit. In no particular order, here are the 10 best cycle routes in Bristol. 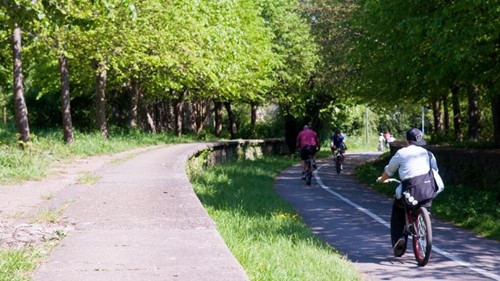 The Bristol and Bath Railway Path is one of the most popular routes in the city for cyclists and walkers alike. Originally a railway line in the 1960s, it was converted into a cycle path by Sustrans between 1979 and 1986, becoming the first of its many cycle routes.

The path is a point-to-point route and can be ridden in either direction, setting off either in Bristol on the corner of Trinity Street and St. Philips Road or in Bath from the old railway bridge before Windsor Bridge Road. The riverside path continues into the centre of the beautiful town of Bath, so why not carry on and explore if you have the time?

You won’t have to contend with any cars on this route, either. It’s entirely traffic-free and lined with lush greenery, so you’ll feel well nestled into the countryside. There are some interesting sights along the way, too, including the Staple Hill Tunnel and the traditional Bitton Railway Station. 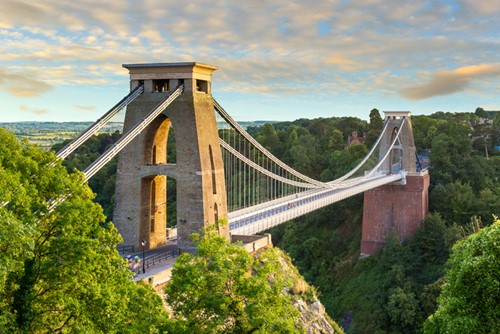 Beginning at Queen Square, this route glides directly south to the Wharf, crossing the small Prince Street Bridge before taking a right and cutting through Museum Street to meet the famous River Avon.

From here, you ride along the Avon’s banks as it winds down the Avon Gorge, past Leigh Woods and underneath the towering Clifton Suspension Bridge (pictured above). The dirt path is smooth, and the sharpest hill is only a 30m incline over 1.5 miles on the approach to Ham Green, so this ride is perfectly suited to cruising.

At the halfway point, you’ll arrive at the quaint boating village of Pill, where you can stop to refuel before pressing onto Portishead.

The last quarter of the journey hops back onto the road, but you’ll still ride along tree-lined lanes between farmland for the most part. Once you reach Portishead, you can continue northwest and finally rest at the shoreline overlooking Wales across the Bristol Channel. 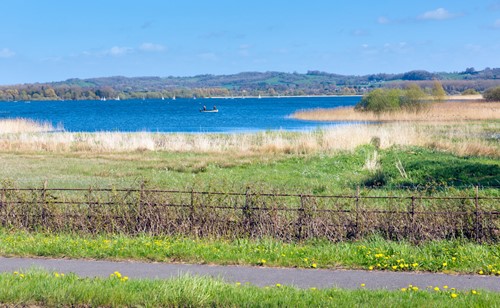 The start point for the Chew Valley Lake Loop is also at Queen Square, in the heart of Bristol.

This trail is easy to navigate as you stick to National Route 3, heading south and continuing in this direction. In fact, you only return north once you hit Chew Lake and jump on Route 410 to take you back around.

At Felton Lane, turn onto Route 334 and follow it to Pear Tree Avenue. Then, take Route 33 to bring you back into Bristol via Long Ashton and Ashton Court.

The surface of the Chew Valley Lake Loop route is entirely asphalt, and there are some traffic-free sections, too, making it ideal for road bikes in particular.

There are fantastic views of Bristol, and beyond from the top of Dundry Hill, so it’s well worth the climb. The latter part of the route also takes you through the charming village of Chew Magna and onto Chew Lake, which is well-renowned for birdwatching. 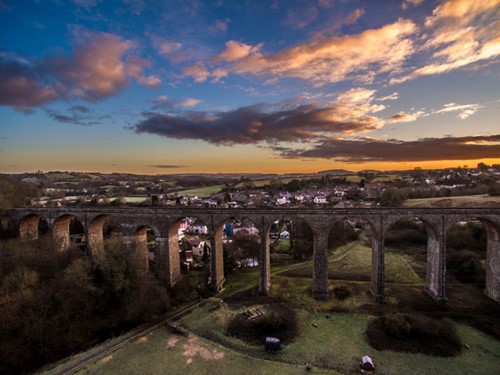 If you’re up for a challenge, the 86-mile long Avon Cycleway has a bit of everything – hills, lakes, woodland, history and dramatic views.

It circles Bristol from its outskirts, dipping into Bath and parts of Somerset along the way. Start from whichever point suits you best, and simply follow Route 3 and Route 4 until you’re back where you started.

You’ll also get to see the vast woodland that surrounds the small village of Iron Acton – one of the many idyllic spots along the route.

The Avon Cycleway is a must-ride for culture buffs and those with a particular penchant for distance riding. A hybrid bike is most suitable for this route because while most of it is asphalt, there are some loose stone path sections, too. 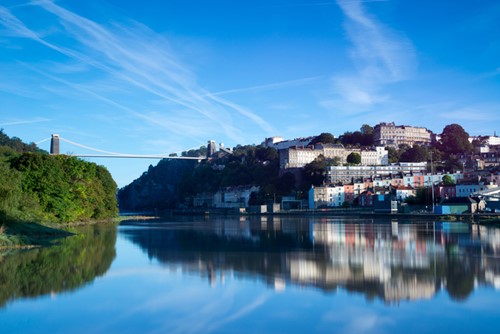 Some argue that Bristol is best experienced by bike – and it’s hard to disagree.

Almost three-quarters of the Bristol Docks Loop is made up of traffic-free paths, which is quite a feat considering this is a city centre cycle route. At just 3 miles long, it’s perfect for taking things easy and absorbing the city’s atmosphere.

As you glide down the banks of the Avon and cut across town, you’ll see all the beauty Bristol has to offer in no time.

There’s something somewhat romantic about this one, too. Starting at the famous Bristol Cathedral, England’s only hall church cathedral, you’ll pass Bristol Central Library and then join the Wharf for views of the docks.

Later on, join the River Avon and the Chocolate Path, as it’s known locally for its resemblance to a chocolate bar, will guide you back into town. Bristol city centre is literally bursting at the seams with pubs, cafés and restaurants for a pit-stop before finishing off the route. 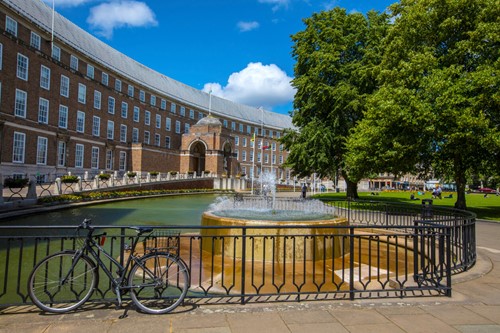 Festival Way is a gorgeous route from the heart of the city centre to the North Somerset town of Nailsea.

Like so many cycle routes in Bristol, you start at Queen Square, again, surrounded by its beautiful gardens and old Georgian buildings.

From there, following Route 33 will take you west out of the city and over the River Avon. You’ll then stop by the famous Grade II-listed Ashton Court Estate – an impressive country park with a mansion house, deer parks, and several mountain bike trails.

Next on the route is the small village of Long Ashton before arriving in Flax Bourton via some brief on-road sections.

At Flax Bourton, you might want to take a quick detour down to Wraxhall to visit Tyntesfield House – an ornate Victorian Gothic revival house with a large garden and surrounding parkland.

Then from here, the traffic-free paths will guide you all the way into Millennium Park in Nailsea. 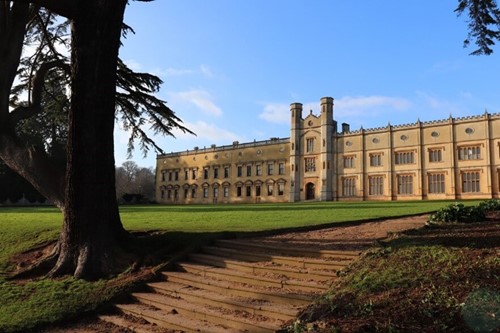 Though we mentioned Ashton Court Estate as part of the route above, it can actually be conquered separately in its own right if you have a mountain bike.

Often referred to as the Nova Trails, Ashton Court was one of the first places in the UK to get an official mountain bike trail in 2002 – and located just two miles from Bristol city centre, it’s a must-ride if you’re visiting.

The route itself is split into two parts: the Nova Trail (blue grade) and the Super Nova Trail (red grade), which vary in length and difficulty.

Suitable for all rider ability levels, the blue grade Nova Trail winds steadily around Ashton Court Estate for four miles, taking in all of its beauty along the way.

For those seeking more of a challenge, the red grade Super Nova Trail is a specially constructed part of the route with testing features such as step-ups, rock gardens and berms.

However, the Super Nova trail presents much more of a technical challenge than elsewhere on Ashton Court Estate, so it should only be ridden by experienced, off-road riders. 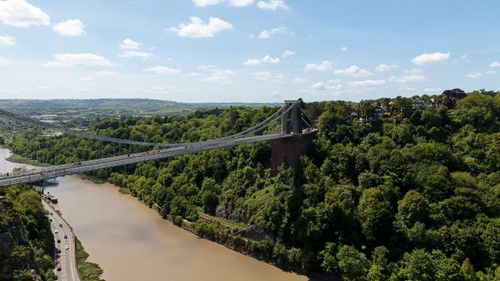 The Ashton-Pill Loop is a circular ride from the centre of Bristol and out along the length of the Avon, passing underneath the Clifton Suspension Bridge towards Avonmouth and then back towards the city via the Pill Path.

It’s certainly not a route for the faint-hearted, as you end up cycling alongside the M5 when you reach the Avonmouth Bridge – and although segregated, you’ll find yourself pretty close to the motorway traffic.

That said, it’s a gorgeous route with views across the river banks and over Bristol from both sides. There are also paths leading up through the nearby tranquillity of Leigh Woods, too, if you’re in the mood to explore.

However, this route has been known to get very muddy in wet weather and is not so well suited to road bikes in these conditions. So, always be mindful before setting off. 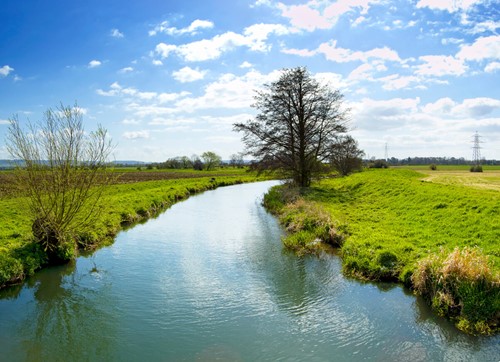 Though the Avon gets most of the limelight as far as rivers in Bristol are concerned, the beautiful River Frome also flows south-westerly through the city.

The Frome Greenway Loop follows the Frome out of Bristol and towards the UWE before looping back via the locally-renowned St Werburghs City Farm, which has been at the heart of Bristol’s inner-city communities, providing food, nature and education since the early 1980s.

The cycle route itself takes in the best of both the city and its surrounding countryside, also passing through Castle Park, Eastville and Stoke Park Estate – a historic park and garden alongside the nearby M32.

Stoke Park is also home to the mysterious Dower House, or the ‘yellow house’ as it’s known locally – a perfect photo opportunity, we’re sure you’ll agree.

Although perhaps not as well-known as the Bristol and Bath Railway Path we mentioned earlier, the Frome Greenway Loop is equally as stunning. 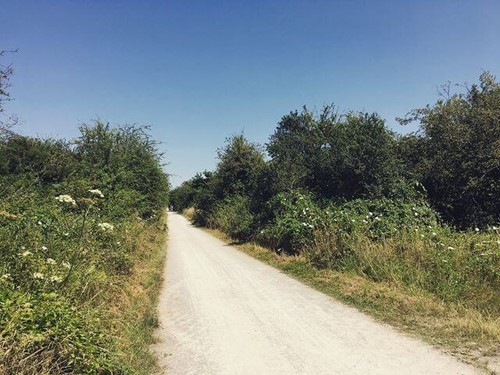 Taking its fruity name from the cargo that the former railway line once carried from the strawberry fields in nearby Cheddar, the Strawberry Line takes you from the heart of Bristol and down through the gorgeous county of Somerset.

The line was used for transporting fruit for nearly a century until it closed in the mid-1960s. However, in the early-1980s, local volunteers began working on the ground to shape the route into what you see today.

Ideal for a family day-trip, the ride is mainly traffic-free, and takes in various landscapes from steep wooden valleys, the Mendips, the charming market town of Axbridge, Cheddar Gorge, and of course – the famous Thatchers Cider apple orchards.

So, you’re in the perfect spot for a quick refreshment.

However, you’ll encounter some busy roads in places like Congresbury, Axbridge, and Sandford along this route, so make sure you ride responsibly.

Now you’ve got plenty of routes to choose from in Bristol, make sure you’re protected before you go and experience them for yourself.

With our specialist cycling insurance, not only will you be personally protected in the event of injury, but your bike and accessories will also be covered against damage, theft, or loss – whether you’re in Bristol or anywhere else!

Click here to learn more about our specialist cycling insurance, and get an instant online quote today.

The 11 Best Cycling Routes In The UK

The 5 Best Cycle Routes In Manchester

The 9 Best Cycle Routes In Wales