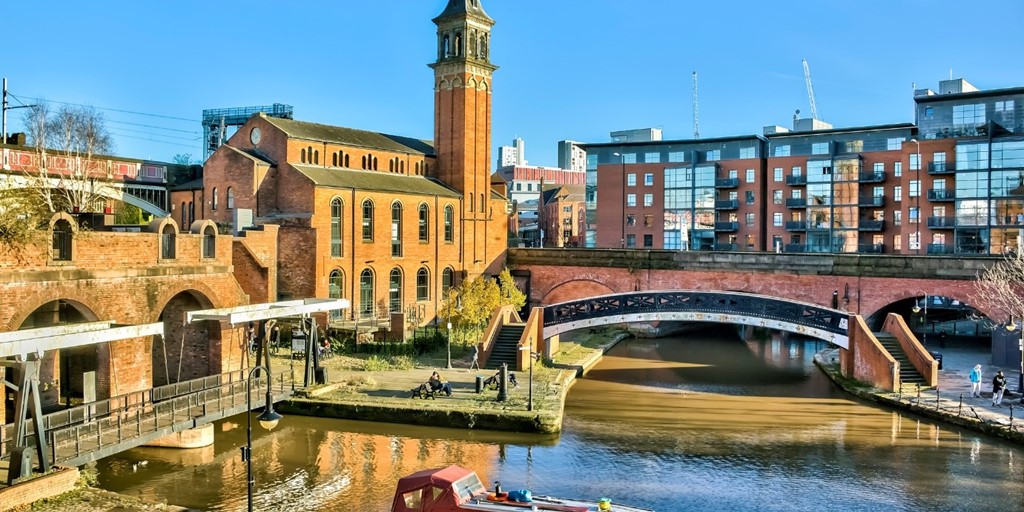 Manchester recently stepped up its support for public cycling facilities in the wake of Covid-19. This follows a £137 million project to renovate the city’s cycle and walkways last year.

The city is dedicated to becoming one of the most cyclist-friendly in the UK, and there’s a lot to explore by bike already. These are the 5 best cycle routes in Manchester – and we’re based there, so we should know. 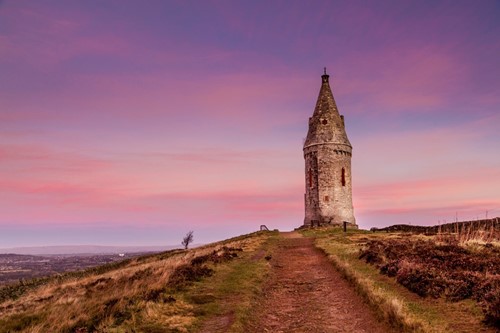 Daisy Nook, once the subject of a Lowry painting, is a country park that runs through the Medlock Valley in Tameside. It’s popular among dogwalkers, cyclists and horse riders, with a bridle path weaving close beside the towpath throughout the route.

Parking is available at the entrance along with a tuck-shop and bathroom facilities. However, it can get busy on weekends so if you’re struggling for parking, try one of the residential streets off nearby Newmarket Road.

Once on your way, you’ll eventually reach a short, stout hill (foreshadowing what’s to come) and emerge by a fishing pond. Here, you’ll wind back around the top of the hill along the canal and bridleway towards Park Bridge.

You might catch a glimpse of the old ironworks at Park Bridge Heritage Centre.  That is, if you can summon the strength to look – you’ll be slogging up 50ft of elevation over 150 metres at the time. When you’re on those inclines (and there are many), remember that once you reach Hartshead Pike, it’s a clear run down from the top. Your hard work will pay off in the end.

Speaking of which, when you crest the pike, you’ll have panoramic views of Manchester’s skyline and the surrounding moors and peaks. On a clear day, you can even see Snowdonia. Here’s an insider tip, too – if you set off after work, you should reach the top of Hartshead Pike just in time to see the sun set.

The route back takes you past quaint cottages and country lanes lined with farmland before bringing you out at Alt Lane at the bottom of Park Bridge. The remainder of the route takes you the same way you came, to Daisy Nook. 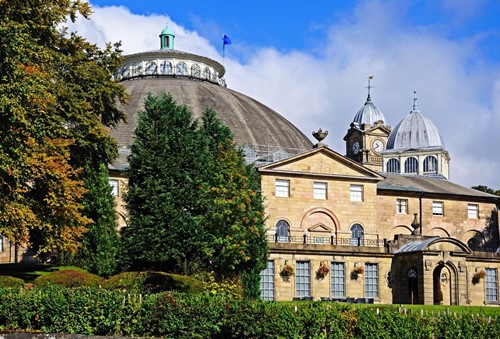 Would you have ever thought you could cycle all the way from Manchester city centre to Derbyshire without having to share the road with a single motorist?

Three-quarters of this route are comprised of canal towpaths. Only the last stretch to Buxton makes use of the wide-open A-roads that cut through the Goyt Valley.

Starting at Piccadilly Basin, you’ll head east following the Ashton Canal Tow Path past old mills, the Etihad Stadium and the British Cycling Centre. For the most part, this section of the ride is easy-going. That said, the series of locks on the way to Tame Aqueduct should keep your heart rate up.

By the time you reach Tame Aqueduct, you should see countryside creep in as fields and hedges line the path. As you head towards Marple, sunlight cuts through the horse chestnut trees that arch over the trail, canal and countless narrowboats moored along the way.

That’s just one example of the photo opportunities waiting for you on this route. The striking Marple Aqueduct is another and there are many more at Whaley Bridge and beyond before you reach Buxton’s own Pavilion Gardens.

Of course, these sights come at a cost. This is a long and hard ride, with the stinger coming right at the end – an 850ft climb over 5 miles. On the plus side, the route offers plenty of pit-stops for you to regain your energy, whether that’s a quiet picnic under a tree or a pub lunch.

If the round-trip looks too intimidating, you could always ride one way and get the train back. You could even stay in Buxton overnight and head back to Manchester in the morning. 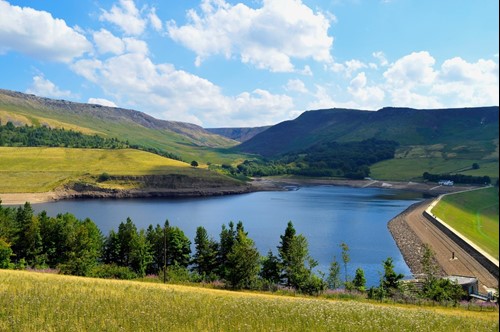 If you’re from Manchester, you’ve almost certainly been to Dovestone Reservoir. It sits at the edge of the Peak District on the Saddleworth Moors with its neighbours Yeoman Hey Reservoir and Greenfield Reservoir. This cycle route takes you on a tour of all three.

Dovestone Reservoir is the go-to spot for a countryside stroll thanks to its picturesque surroundings, straightforward terrain and proximity to the rest of Manchester. For this reason, it’s a good ride to bring the kids or dog on.

You’ll start the ride at Dovestone car park. But, as with Daisy Nook, finding a parking spot becomes quite competitive on weekends. So, it’s best to start early if you want to guarantee yourself a space.

From the car park, you’ll head north, following a paved path east of the reservoir. Then, you’ll continue up the west side of Yeoman Hey, towards Greenfield. On the way, you’ll pass the snaking creeks, inlets and channels that feed the reservoirs. Eventually, you’ll approach Greenfield Waterfall – a lovely boulder-strewn cascade pouring down the hillside. This marks the halfway point.

From here you’ll make the same journey back towards Dovestone Reservoir. Only this time, you’ll be cruising down the hill you were probably cursing on the way up.

The route isn’t entirely mirrored on your way back, though. Where you crossed between the Dovestone and Yeoman Hey reservoirs on the way, you’ll continue straight on the way back. Pine and larch woods litter the trail as you wind around the western side of Dovestone Reservoir and back to the car park.

The beauty of this route is that you can modify it however you like. If you’d prefer a shorter ride, keep left after first reaching Yeoman Hey Reservoir and you’ll loop back around to the car park. This is ideal if a little one decides they’ve had enough earlier than you expected.

Similarly, if you’d prefer a longer and more challenging ride, continue past the car park on your way back and head up to Chew Reservoir to the southeast. At 1600 ft above sea-level, it was the highest constructed reservoir in England until 1971. One for the hill climbers! 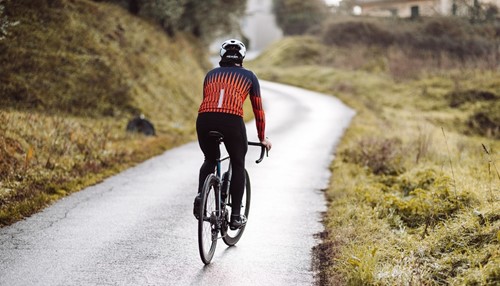 Sometimes we don’t have time to escape the city centre and get out into Manchester’s surrounding hills for a ride – and the answer to that problem is the Fallowfield Loop. It’s the perfect rough and ready ride after work or at the last minute.

The route stretches from Chorlton to Fairfield and passes through several residential hubs around south and east Manchester. Whether you start in Chorlton, Levenshulme, Gorton or anywhere in between, within minutes you’ll be on the trail enjoying a gentle urban ride, free from any motorists.

The Fallowfield Loop is one of many cycle-paths around the UK owned by Sustrans. This charity is responsible for creating over 5,200 miles of traffic-free cycle paths and a further 16,000 miles of signed cycle routes around the UK. Like many of Sustrans’ cycle paths, the Fallowfield Loop follows a former train line. This nearly guarantees a mostly flat, straight ride.

Debdale Park in Gorton is the most opportune place to conclude the ride, but there are several options to link up with nearby routes if you want to continue. You could pedal a bit further north and join the Ashton Canal to head towards Stalybridge or Marple – which would actually link up with our route to Buxton mentioned above.

The Ashton Canal path runs back into central Manchester to the west, too. So, from there, you’ll find your way back to the Loop line and be home in time for tea. 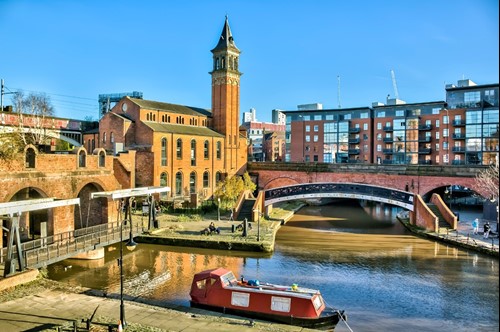 Manchester’s history is stepped in industry and trade. Before the steam engine was invented, expansive waterways were dredged out of the countryside so goods could be transported all around the UK.

Long gone are those days of industry, but the canals remain. And where there’s a canal, there’s a towpath. Today, cyclists and walkers are treated to an endless web of off-road trails coursing throughout British green belt.

This route from Castlefield Basin to Lymm is a prime example. It clings entirely to the Bridgewater Canal – one of the oldest in England. As such, it runs all the way to Runcorn, with connections to the Manchester Ship Canal, Leeds Canal and Liverpool Canal. It once connected to the River Mersey, but has since been cut off.

Even with all this history, the route still has modern elements. The ride begins at Castlefield, one of the trendiest spots in Manchester. Come summertime, this is home to some of the most sought-after beer garden real estate in the city.

A few miles beyond, you’ll cruise close past Old Trafford and once you’re on the stretch out of Sale you’ll pass Trafford and Sale’s rowing clubs. Further still, an expansive, rural landscape opens up as you cut through the fields surrounding Dunham Massey.

You could consider this trail a rarity for Manchester cycle routes. At 14.6 miles one way, it’s quite substantial, yet its elevation barely changes throughout. So, for once Google Maps’ journey duration estimation might actually be accurate.

If you’re cycling in Manchester, or anywhere else for that matter, it’s important to make sure you’re safe.

Get an instant online quote today and see what we can do for you.