The average cyclist normally assumes that bolt cutters are the only tool in a bike thief’s armoury. That’s why cable locks which are susceptible to bolt cutters are falling in popularity. But sadly, new bike theft techniques mean that even the popular “D-lock” design is not invincible, which is why it’s important cyclists use high-quality, Sold-Secure or Thatcham approved bike locks to prevent bike theft. 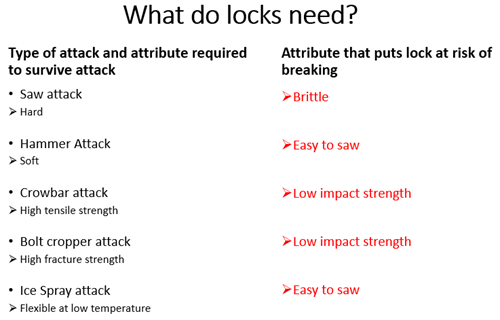 One less well-known tool in bike thieves’ armoury is a portable, hydraulic car jack. Bike thieves have been known to use car jacks to force the shackle off the bike lock body. After testing this on a simulated machine both vertically and horizontally, Abus found that its lock would only break after 6 or 7 tonnes of pressure was added. Therefore, the 3.5 tonnes of pressure that an average portable car jack produces would never break a good D-lock. However, many other cheaper locks would not be able to withstand such force.

This is an extraordinary technique that’s being using by bike thieves. Did you know that some metals become brittle when they’re extremely cold? Savvy bike thieves do. They’ve been using a freezing-cold chemical spray of compressed chemical difluoroethane to soften bike locks before smashing them open.

Make sure you check when purchasing a bike lock that it has been ice spray tested to guarantee that you don’t become a victim of this innovative technique. 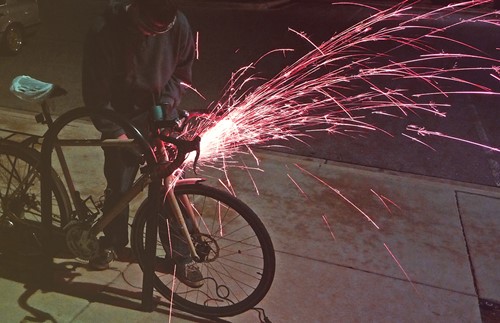 According to Abus, 54% of bike thefts in the UK take place in sheds, garages and houses. This is unsurprising, considering houses are often empty during the day and are still vulnerable at night as people sleep. Sawing away at whatever lock you have secured your bike to in a shed or garage is less likely to arouse suspicion than in a public place.

Another common utensil in a bike thief’s toolkit is a sledgehammer. Brute force is a standard tactic for a backpack cycle thief, so it’s essential that a lock can withstand such pressure.

Abus uses machines to simulate the force generated by a 3kg or 6kg sledgehammer hitting its products’ locking mechanisms. Some locks can buckle under such pressure, but high-quality ones should not.

Probably the most frequent tool used by bike thieves are bolt cutters. They’re common amongst thieves because they are usually pretty light and are therefore quite portable. They can also get through a lot of different materials including some metals. This is an example of where having a lock with high-quality metal is vital.

Bike thieves are coming up with lots of innovative ways of stealing bikes, which is why Cycleplan policyholders must use Sold-Secure or Thatcham approved locks with either a bronze, silver or gold rating depending on the value of their bike. Why spend hundreds of pounds on a bike, only to secure it with a cheap lock and find that you’re not covered?