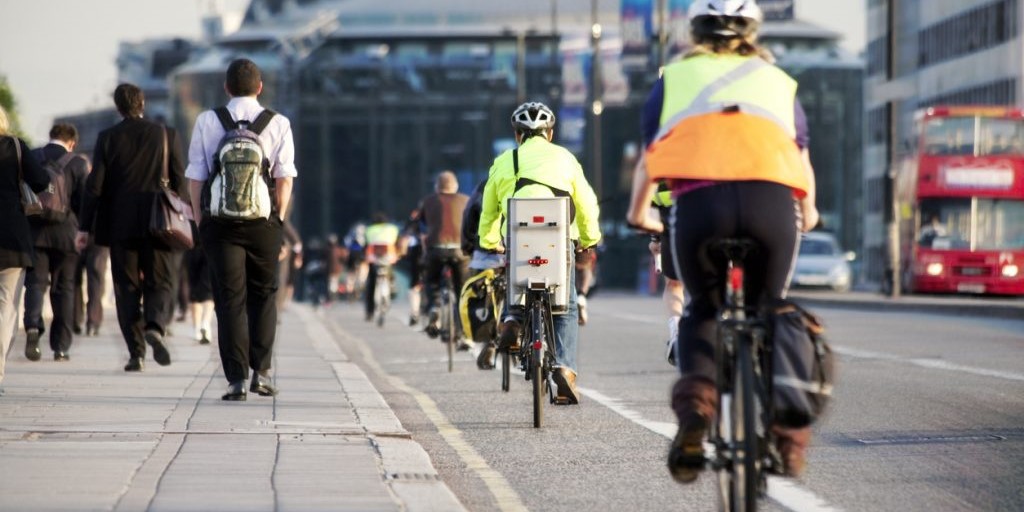 Our new study has revealed the top 10 UK cities where cyclists feel their safety is most at risk – and they’re all in England and Wales. 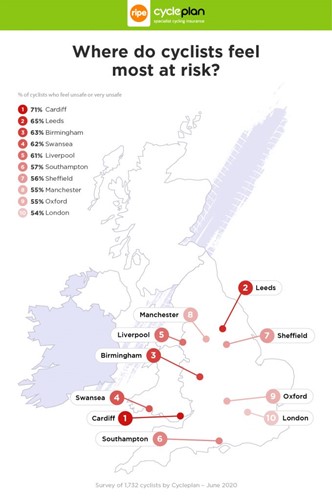 Cardiff tops the table, with 71% of local cyclists saying they feel either “unsafe” or “very unsafe” when cycling there.

This is followed by Leeds where 65% of cycling residents feel at risk, and Birmingham where 63% of cyclists feel unsafe or very unsafe.

By contrast, Cambridge, Bristol and Edinburgh were deemed amongst the safest places to cycle in the UK.

Overall, just 17% of cyclists nationwide said they feel “safe” or “very safe” on the road.

The findings come from a UK-wide survey of 1,732 cyclists. They form part of our new campaign – Pedal Safe – which seeks to highlight the risks associated with cycling and educate the public on how to prevent accidents occurring.

Worryingly, we also found that 35% of cyclists have been injured while cycling in the past 12 months.

Pedal Safe has been launched in response to the enormous increase in cycling participation seen since the UK lockdown came into force in March.

The UK Government recently introduced a new £2 billion investment package to improve cycling infrastructure within towns and cities, including creation of new cycle lanes. However, when asked their thoughts on this, 69% of survey respondents said they do not believe these measures go far enough.

Speaking to Cycleplan, a cyclist (who didn’t wish to be named) said: “I’ve been dragged off my bike by someone in a passing car. I’ve been told to ride in the gutter like the rest of the vermin. I get frequent “punishment passes” that are a deliberate attempt to scare or injure.”

Another cyclist commented: “I’ve only been hit by a car once but there have been too many near misses to mention. One of my best cycling buddies was killed by a car.”

Our ambassador, the Olympic road race cyclist, Lizzie Deignan (née Armitstead), had this to say about the results: “It’s fantastic that people are being encouraged to cycle more, but we need to make sure they feel safe. More infrastructure will be vital, as will educating drivers to be more patient and to share the road. After all, most cyclists are also drivers and vice versa. There should be room for us all.

“I would advise anyone who feels nervous on the bike to take all possible precautions to feel more confident. For example, wearing bright clothes and lights to be as visible as possible, not hugging the kerb – sit a bit further out to make yourself seen. This also takes away the temptation for drivers to nip by without making sure there is a safe gap in traffic to overtake.” 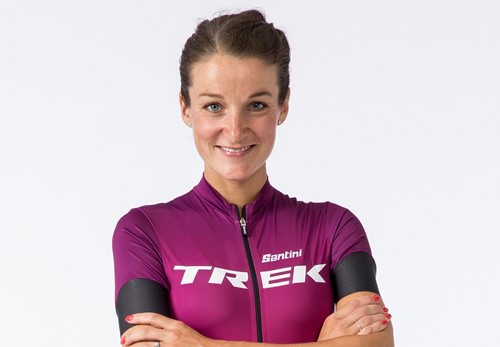 John Woosey, our Founder and Managing Director, also said: “These findings are extremely concerning, particularly given the emphasis currently being placed on cycling as a silver bullet for reducing pressure on public transport in the post-lockdown era. Let’s be clear, we’re certainly not saying that cycling is a bad thing. By contrast, it’s been fantastic to see the huge increase in participation over the past few months.

“However, cycling comes with a degree of risk – one that everybody must be mindful of. It’s a sad fact that roads across the UK currently fall short when it comes to providing a risk-free route for cyclists. That’s why, as part of Pedal Safe, we have shared our top tips for road cycling safety, and we would urge all cyclists to refer to these as a minimum before heading out on two wheels.”

You can read the full safety tips article here.

As part of Pedal Safe, we want to hear about your cycling safety heroes. It could be someone in your local community, a friend who helps to fix bikes or a family member who campaigns for safer cycling in your town.

Whoever your hero is, nominate them via our Facebook, Twitter or Instagram and tell us why they deserve a shout-out. The winner will feature as part of Pedal Safe and help us spread the word about cycling safety even further.