You probably don’t need to be armed with the latest Government statistics to know that cycling has been growing in popularity in the UK over the last few years.

Through a combination of hero figures like Bradley Wiggins, Mark Cavendish and Lizzie Armitstead doing a fantastic job of flying the flag, and viewership of competitive cycling, cycling has never been more popular.

But what are the figures behind the big rise in the popularity of cycling? We’ve brought some standout statistics from reputable sources to give a quantitative summary on our favourite mode of transport. Check out these remarkable statistics about UK cycling:

Sadly, one of the more dark statistics is the recent rise of serious injuries to cyclists in recent years. According to the Department for Transport (DfT), there was a large rise in 2014 of seriously injured cyclists to 3,401. This compares to a figure of 3,143 individuals seriously injured in 2013 (RoSPA), making 2014 witness an 8.2 per cent rise in such injuries.

Cycling can be a fun hobby or competitive pursuit, a great way to stay fit or a way to speed up your daily commute, but these figures underline just how important road safety is every time you get into the saddle.

Further 2013/2014 figures from the Government show on average, 15% of UK adults find time to cycle each month for any purpose. Broken down by local authority however saw some very interesting figures come to light.

Unsurprisingly perhaps, Cambridge was the local authority who had the highest % of adults cycling at least once per month in 2013/2014, registering a whopping 57% of adults getting on the saddle each month. Reasons behind Cambridge being such a popular pursuit with cyclists could include its cycle friendly road network, flat geographic profile and large student population.

Rounding out the top five for cycling popularity amongst adults per month were Oxford (39%), South Cambridgeshire (33%), Isles of Scilly (33%) and York (32%). 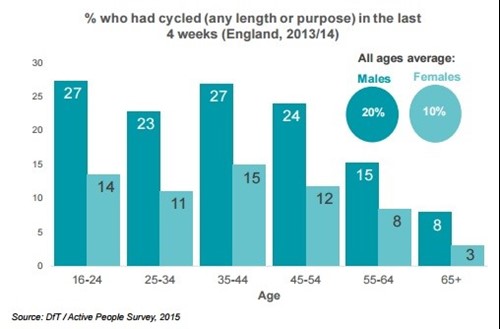 There are also more distinct patterns in terms of spread across age and gender numbers. On average 20% of males cycled for any purpose per month versus half of that in 10% of females. It is also interesting to note on the above diagram how after a slight rise in both genders in the 35-44 popularity stakes, cycling steadily is generally even before declining as the population ages.

That sums up our interesting stats about cycling. To help protect yourself in the event of an unfortunate incident, consider a cycling insurance policy.

Got some interesting statistics of your own? Feel free to share them in the comments below!