With restrictions finally being lifted across the UK, it’s time to dust off the cobwebs, get back on two wheels, and see some sights again.

If you want to start planning a few cycling routes but aren’t sure where to go, we’ve got you covered. Here’s our selection of the 11 best cycling routes in the UK in 2021. 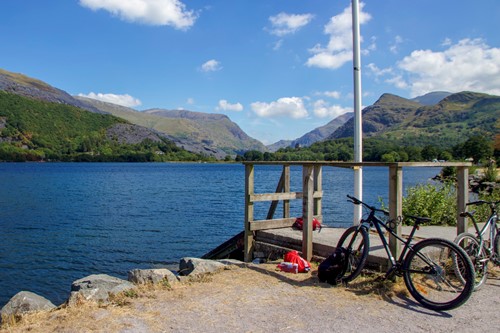 If you want to see high peaks, impressive mountains, and glass-clear dark lakes, a circuit of Snowdon using the Llanberis Pass is just the ticket. This route will provide you with picture-perfect views of the Welsh countryside’s trademark visceral beauty and tranquillity.

There’s a stunning 10-mile mountain bike route that starts in Llanberis, Snowdonia and climbs the Llanberis Path to Snowdon’s summit before returning down the same track.

This route is perfect for mountain bikers looking to trek up steep boulder trails that’ll provide a rigorous test of their riding skills.

However, it should be noted that Snowdon’s steep trails are popular with walkers and cyclists alike. Therefore, caution and awareness of your surroundings are especially paramount.

The Snowdon Voluntary Cycling Agreement outlines clear rules that cyclists must follow. They must not ride on three of the bridleways (Llanberis, Snowdon Ranger, and Rhyd Ddu paths) to the summit between 10 am and 5 pm from May until the end of September every year.

Although this may seem inconvenient, an early cycle to see the sunrise will give you the serotonin boost you’ve been missing.

Tremadog Bay is where the rocky hills of Snowdonia meet the sea and coastal breeze. So, if you’re craving a coastal view, this is your best bet.

Not only does Tremadog Bay host some astonishing sea views, but the roads around the Cader Idris provide some of Snowdonia’s best cycling routes.

The views from the bay stretch far and wide. You’ll see the medieval Criccieth Castle standing proud over Tremadog Bay, the Llyn Peninsula, and the mountains of Snowdonia.

Essex Rivers is a great route for those who want the gentler, more scenic bike rides. If you’re a busy Londoner wanting to escape frantic everyday life in the capital, this is the route for you.

Within this area, you can also visit the Flagship Country Park for plain sailing – it’s ideal for those looking to cycle with family.

The River Colne is a small river that runs through Essex and passes through Colchester. This has an estuary that joins the sea near Brightlingsea.

The Crouch to Blackwater tour is a circular, 22-mile-long route that goes through the villages of North Fambridge, Althorne, Latchingdon, Mundon, Maldon, Purleigh, and Cold Norton. Being able to tick off so many destinations and sights would provide any cyclist with a real sense of accomplishment.

The National cycle route 45, known as The Mercian Way, provides the perfect cycling route for families or groups with younger riders.

The journey crosses the River Severn itself, and there’s a park situated at Alverly along the river between Bridgnorth and Bewdley. Along the journey, there’s a visitor centre with a children’s play area.

Cyclists can follow the main pathway through the park, which is part of the cycle route. This runs through Hampton Load, partly off-road, and continues to Bridgnorth along the roads.

Once you’ve completed your ride, you can take a moment to relax and sample wonderful views from inside the visitor centre. Or you can enjoy a drink and a bite to eat in the cafe.

While you're there, it's worth heading to the Severn Valley Railway station, another popular tourist attraction. The steam-hauled passenger train travels for 16 miles along the beautiful Severn Valley, running through Kidderminster, Bewdley, and Bridgnorth.

The South Downs Way is an off-road, undulating mountain bike route teeming with history and picturesque sights. Although it runs through quite busy parts of the country, including the city of Winchester and the suburbs of Brighton, you’ll still sample plenty of countryside and feel like you’re getting away from it all.

On this route, you’ll discover woodland, farmland, rivers, and historical landmarks. You’ll either start or end in Winchester, where you’ll find Winchester Cathedral – the largest cathedral in Europe.

Along the route, you’ll find the Queen Elizabeth Country Park, a large area of beautiful mixed woodland that’s perfect for a break or picnic. You’ll also cycle past the eastern tip of the South Downs Way. Here, the hills meet the sea with a great white bow of rock at Beachy Head – a beautiful location that’s calling to be photographed and taken in.

Beachy Head is the highest chalk cliff on the South coast, and its wide-open land and sea views will take your breath away. It’s rumoured that, on a clear day, you could even see the border of France.

The 160km journey along the South Downs Way is the only UK's National Trail that’s fully navigable by bike.

In addition to the South Downs Way, there’s 1,200 km of car-free bridleways across the National Park that you can take advantage of.

There are also miles of leafy country lanes and old railway trails you can explore, including the Downs Link, Meon Valley Trail, and Centurion Way.

The Cheshire Cycleway route was devised by members of the Chester and North Wales CTC  – the national network of the UK’s largest and oldest Cyclists Touring Club. Therefore, you know it’s a route worth taking.

This route has a bit of everything, whether you want flat routes or exhilarating hills. There are backroads, rougher tracks, bridleways, canal towpaths and various sections of disused railway track to keep you on your toes.

The Cheshire Cycleway encompasses various tourist attractions but also provides miles of quiet roads. Tourist attractions include Lamaload Reservoir, the highest point on the Cycleway at 417 metres, and Parkgate, which was once a bustling port, later turned into a fashionable bathing spa.

The variety of terrain and the sheer number of routes leading from the main cycleway means that cyclists of all abilities can enjoy riding here. It’s just a case of choosing an appropriate area and mapping out your route before setting off. 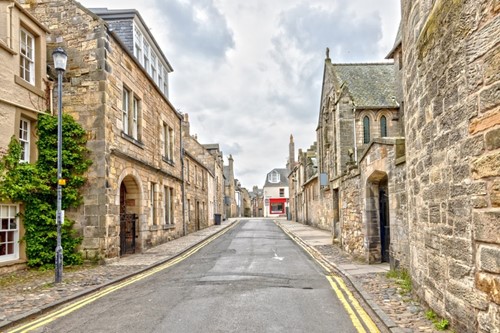 Known as the East Neuk 50 Cycle Route, this 50-mile route is one of Scotland's most rewarding bike rides.

It’s incredibly accessible compared to other routes in this list, as it starts and ends at train stations (Kirkaldy and Dundee, respectively).

It has one significant difference from other cycle routes, as it’s mostly segregated from other motor vehicles. This means you’ll be off the main road for much of the route, which follows cycle paths that were created as part of the project.

The journey was originally designed for tourists and allows visitors to take in the scope and beauty of the east coast of Fife, such as the stunning beaches and fishing ports.

The East Neuk was once the heart of the east coast of Scotland’s fishing trade. The tiny harbours along the East Neuk may now be home to more leisure boats than those landing lobster and crab, but the area’s fishing history gives it even more charm.

Reachable by road or rail from Edinburgh, this is an easy cycle route that’s perfect for all cyclists. Along this route, you’ll see, Redhouse Castle, the 15th-century tower house that can be seen from the railway station, and the Museum of Flight.

The route is mainly flat and not too hilly. As such, it’s a great option for beginners or those looking to ease into exercise after a long break.

If your journey starts at Longniddry train station, the start of the path is marked with a large sign announcing the distance to Haddington – roughly five miles.

Once you arrive in the town of Haddington, there are plenty of cafes you can visit for a bite to eat or a quick coffee to restore your energy levels. 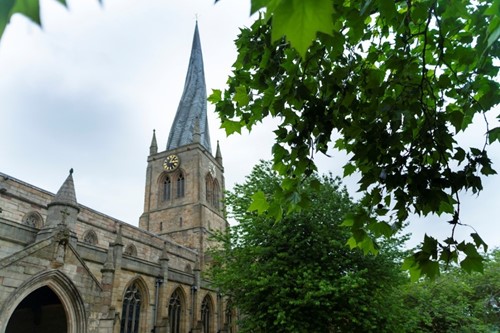 Everything that’s beautiful about the Pennines and its surrounding areas is evident in this cycle route.

The route’s central section starts in Leeds and runs to Chesterfield, the largest town in the UK.

Cyclists are advised to begin at the Royal Armouries, one of Britain's oldest museums situated along the River Aire.

Cyclist will travel for several miles along the traffic-free path next to the River Aire and the Aire Calder Navigation canal before the path connects to the railway path at Bottom Boat.

From here, you’ll continue to Rotherham, where you'll join the quiet roads into the Rother Valley and then move swiftly into Sheffield.

The Trans Pennine Trail leads directly into Sheffield's centre and out of it on cycle paths and quiet lanes.

A disused railway path takes you into Derbyshire. After travelling through Renishaw, you can either join the Chesterfield canal towpath or use the railway path and bridleways via Inkersall. Once in Chesterfield, make sure you visit the town's crooked spire church, which, rumour has it, the devil sat on to make it crooked. So, not only will you ride along an iconic route, you’ll witness a piece of supernatural history!

You have plenty of options to choose from when you cycle along the Jurassic Coast.

From a gentle, tucked away ride to a faster-paced clifftop climb, this route offers something for everyone. Whether you’re getting mucky on an off-road hike or following a simple bypass, you'll be blown away by Dorset's exquisite and diverse scenery.

It's almost all rocky terrain with hills throughout the journey. This is certainly a ride that will work your quads and glutes if you feel like testing your strength and endurance.

With wonderful coastal views, scenery, and historic landmarks, The Jurassic Coast has it all.

If you're in the area without a bike, there are plenty of bike rental shops to help you out.

From quiet villages to ocean and mainland panoramas, this route provides 62 miles of scenic joy. The relatively flat route is only accentuated by the Isle of Wight's peaceful charm.

There’s a range of cycling routes to suit everyone, whether you want to ride on challenging off-road paths or calming byways.

For the Round the Island Route, you can start from wherever is convenient. If you're starting at ferry terminals, the closest ones to the route are Yarmouth and Cowes.

If you're arriving on the Island via Ryde, it's easy enough to pick the trail up from Wootton or Nettlestone, depending on your direction of travel.

The Isle of Wight also hosts an annual cycling festival which is usually held in September.

Now you know exactly where to ride your bike in the UK, make sure you’re safe when you do so.

Our specialist cycling insurance will cover you if you sustain a serious injury from cycling, while your bike and accessories will be covered against damage, theft, and loss.

Click the link above to find out more about our cycling insurance, or get an instant online quote and see what we can do for you.