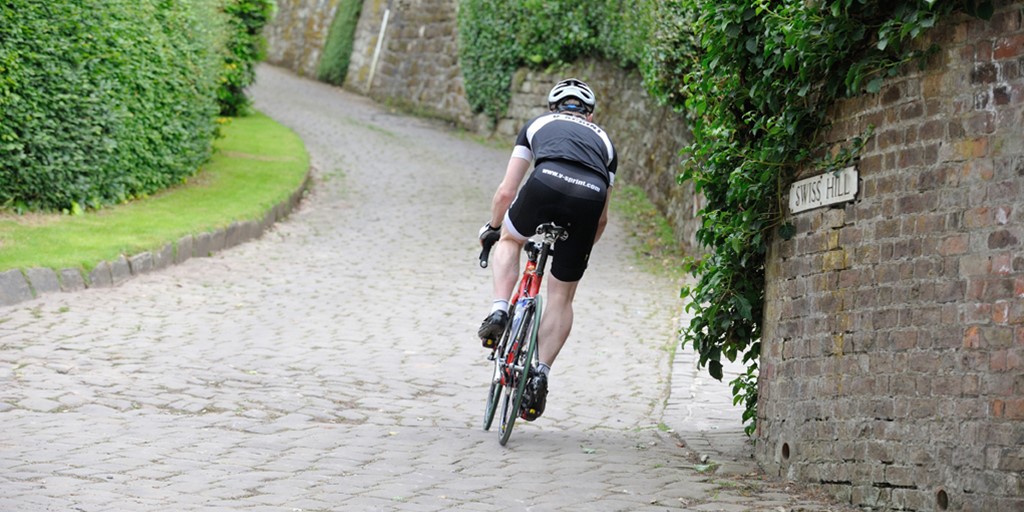 Let’s be honest, the Spring Classics are arguably the best time of year for any cycling enthusiast – they’re amazing to watch and extremely gruelling to ride. They’re cycling’s biggest and most prestigious one-day races – with their punishing cobbled climbs making them stand out from the crowd.

Now the Spring Classics are upon us, have you got the urge to try some challenging cobbled climbs for yourself?

Despite what you might think, you don’t have to leave the UK to have your own cobbled ascent experience. Here’s our pick of the best cobbled climbs to include in your next ride.

Read more: The Best Cycling Routes in the UK

We’ve jumped in at the deep end with the first climb! With a gradient that reaches 45% in some places, the Corkscrew in Bollington is the steepest cobbled climb in the country.

The organisers of the Cheshire Classic maintain that no-one – pro rider or otherwise – has made it all the way to the top without dismounting at least for part of it. So, why not dig deep and give it a go? Serious bragging rights await!

Cheshire is well and truly flying the flag for cobbled climbs in the UK, with a second entry from the county making our list! Swiss Hill is iconic, and its maximum gradient of 25% means it’s no surprise Team Sky use the climb to prepare themselves for the Tour of Flanders.

Although challenging, this climb is surrounded by scenic rural views of Cheshire, which will hopefully distract you from the burning in your quads!

Read more: The Scariest Climbs in the World

While Shibden Wall has always had a fierce reputation as one of the most revered climbs in Yorkshire (for which there’s a lot of competition!), the 2017 Tour de Yorkshire truly put it on the map for cycling enthusiasts across the country.

The perception that Shibden Wall is a cruel climb not only comes from its punishing length but also the fact it lulls you into a false sense of security by beginning with a tarmacked section. Your body is then in for a shock when it’s hit with half a mile of cobbles!

If this cobbled challenge looks familiar to you, then don’t worry, you’re not going crazy! Gold Hill was made famous by an advert for Hovis bread in the 1970s. If you can remember the ad, you’ll be able to recall the baker boy having to dismount his bike and push it up the cobbles – looking at the climb, you can hardly blame him!

As with Shibden Wall, this climb starts with a stretch of tarmac but as soon as the cobbles kick in, so does the gradient – and the battle to the top begins. Be sure to take a photo once you reach the top – the picturesque street will look great on your Instagram feed!

Granted, compared to the other climbs on this list, Victoria Street’s average gradient seems relatively mild. However, it’s definitely worth taking your bike here, as the colourful, chocolate box shopfronts will keep you entertained and stop you focusing on the climb ahead.

With a mix of colourful buildings, cobbles and noteworthy arches, you can certainly see why this climb was JK Rowling’s inspiration for Diagon Alley. So why not climb this street in intervals and do a Harry Potter pilgrimage as you go along?

With an average gradient of 19%, Constitution Hill is one of the steepest residential roads in the UK, and one of the very few that are still cobbled. If you’re a Tour of Britain fan, you’ll remember it from the 2010 edition of the race, and it even had a starring role in the opening scene of the 1997 film ‘Twin Town’.

Although the climb is only 300m long, it’ll sap every ounce of energy from your legs, with a 23% gradient hitting you as you approach the summit. However, the silver lining is that the cobbles have been very well maintained, so you can expect a smoother ride than some of the other entries in our list.

Did any of these cobbled climbs take your fancy? If they did, make sure you take out Specialist Cycling Insurance so you can power up those hills without unnecessary worries.