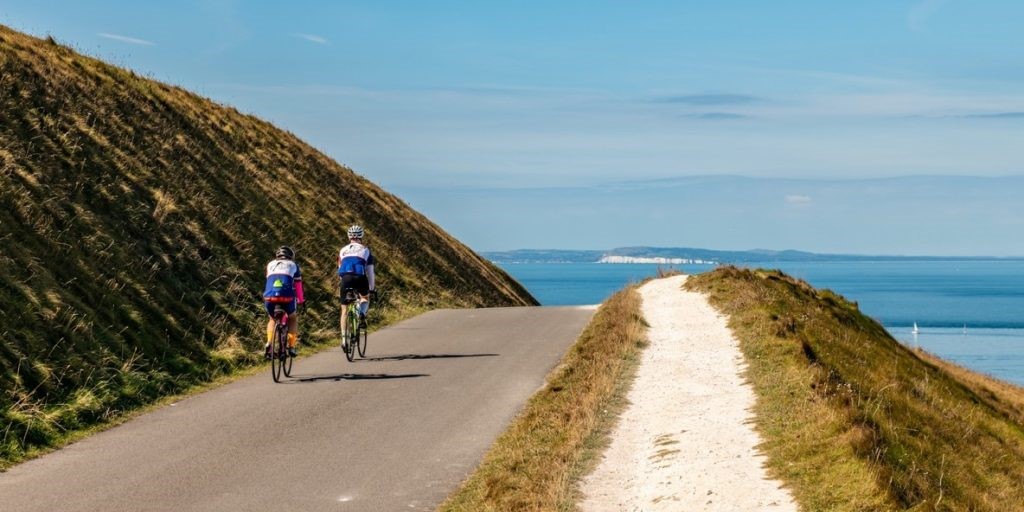 The Isle of Wight, situated off mainland Britain’s south coast, is a cyclist’s paradise. Its cycling routes encompass hilly peaks, dramatic coastlines and picturesque backdrops. So, where to ride?

Here are our top 5 Isle of Wight cycling routes.

Round the Island route

This is the biggest cycling challenge the Isle of Wight has to offer. But you’ll be rewarded with unspoilt vistas of countryside and coastline throughout.

Doing exactly what it says on the tin, Round the Island takes you on a loop around the island. The choice is yours whether to tackle it clockwise or anti-clockwise. Just remember to follow the signs on the route – those with a white background take you clockwise and a blue background will take you in the opposite direction.

As it’s a loop, you can start the journey wherever you like. We recommend deciding on a place to stay, then kicking off from there.

Along the way, you’ll have privileged views of The Needles, a group of three chalk stacks and perhaps the island’s most recognisable landmarks. You’ll also see Mottistone Manor, an Edwardian National Trust property with extensive grounds.

Throw a few towns full of pubs, cafés and restaurants into the mix and hopping off to refuel won’t be a problem!

This hugely popular Isle of Wight cycling route is – unsurprisingly – full of beautiful scenery. But, it’s also a great option if you’d like to take in some of the island’s wildlife habitats. As its name suggests, the trail takes you through woodland areas which are home to the enigmatic and iconic red squirrel. Its grey cousin doesn’t inhabit the Isle of Wight at all, so red squirrels continue to thrive.

The cycle route begins at West Cowes and follows a disused railway line to Newport. It then takes an off-road route to Sandown on the island’s coast. From there, you’ll discover a stretch along the seafront followed by another off-road section along an old railway line to Wroxall. Finally, you’ll ride through countryside to Merstone.

Why not stop to admire the seafront at Sandown and grab some chips while you’re at it? You’ll need the energy for that final leg. (Just make sure you top up on your water before heading off!)

This medium difficulty level route aptly takes in the sights of Ryde, a town on the Isle of Wight’s north coast.

Begin your journey near Wootton before cycling east toward the town of Seaview. Here, you can stop at the Seaview Hotel to recharge the batteries. You’ll need to jump off and push for a short footpath section just after Ryde Golf Club. However, you’ll be rewarded with a pitstop at Quarr Abbey and its delightful tea shop. Head inland again for the final stretch to Firestone Copse.

Top tip: don’t pass Rosemary Vineyard without stopping to check out one of the Isle of Wight’s major English wine producers. You might even be able to grab a bottle to enjoy on the beach later that evening. Even if you’re not a wine drinker, this beautiful spot is well worth a tour.

Looking for a challenge but not quite ready to take on the full Round the Island route? This could be the ideal compromise. Starting in Newport, this ride will take you around three hours. Like the Red Squirrel Trail, a large chunk of the route follows the old steam railway track.

Within the first few kilometres, you’ll take in the greenery of Newport Golf Course. You’ll then climb steeply towards Arreton and loop back through the village of Downend. If you’re into historic locomotives, be sure to stop off at the Wight Steam Railway after the fourth leg of the route. Here, you can grab some well-earned refreshments.

You’ll finally join a cycle track into Island Harbour Marina and loop back to Newport.

This one’s a much shorter, flatter ride. It’s the perfect afternoon route if you’re travelling with children, or fancy something a little less taxing. It’s also great if you love the water, as the entire ride follows the seafront’s curve.

Starting just outside Sandown, near the zoo, you’ll simply need to find the cycleway and head south-west towards the town. Keep pedalling until you arrive at Shanklin.

Now, kick back and relax with an ice cream. You deserve it!

What else is there on the Isle of Wight?

The island is also a great place for a staycation, with accommodation options and activities aplenty plus lots of places to eat, drink and rest your weary legs.

But, it’s not just seaside pubs and eateries on offer (although there are tons of good ones). The island boasts an incredible five Michelin-starred restaurants, too. Not bad for a land mass that’s only around 300miles2 in size.

And did we mention that it’s the sunniest place in the UK? The isle gets between 1,800 and 2,000 hours of sunlight every year. Compare that to the UK average of a meagre 1,493 hours and it’s hard to see the downsides to a cycling trip on the Isle of Wight.

How do I get to the Isle of Wight?

Chances are, you’re not an Isle of Wight local. The island’s population is just 141,000, but this swells significantly with over 2 million overseas visitors every year. So, you’ll need to cross the Solent (the strait that separates the Isle of Wight from mainland UK) to get there.

There are a few options for this. Car ferries (which also take motorhomes) run from Portsmouth to Fishbourne, Lymington to Yarmouth and Southampton to East Cowes in 45 minutes, 40 minutes and an hour, respectively.

If you choose not to drive, all ferries also welcome foot passengers. Alternatively, you can travel by hovercraft in only 10 minutes from Portsmouth to Ryde. All routes provide easy links for ongoing travel once you arrive.

And, if you’d rather hire a bike when you get there, head to Wight Cycle Hire in Yarmouth or Isle Cycle which has branches in both Cowes and Sandown. Half a day’s hire starts from £8 for kids and £12 for adults, so it’s the perfect option if you’d rather not lug your own bike with you.

You can find out more information about travel to the Isle of Wight here.

Where can I stay in the Isle of Wight?

The Isle of Wight is strewn with pretty towns and villages that make it well worth a longer trip of several nights or even a week.

Try Sandown on the south-east coast if you’re after a traditional seaside holiday of fish ‘n’ chips, amusement arcades and swimming in the sea. Yarmouth and surrounding towns in West Wight offer a quieter stay, while history buffs should head to Cowes – home to the globally-famous sailing regatta. Visit Osborne House, built for Queen Victoria, or the Cowes Maritime museum to soak up the Isle of Wight of times gone by.

Now you know where to take your bike when you visit the Isle of Wight, make sure you’re safe when you do. Our specialist cycling insurance means you’ll be covered against injuries and your bike and accessories will be covered against damage, theft, or loss – whether you’re out riding or at home. Get an instant online quote today and see what we can do for you.