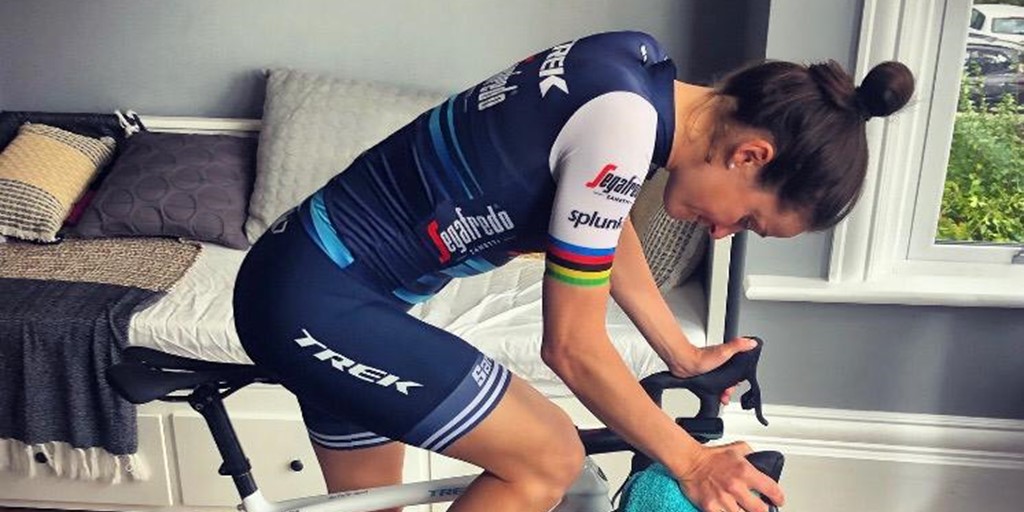 Lockdown has shaken the world of professional cycling – and nobody knows it more than Lizzie Deignan.

We speak to Lizzie about how she has found this strange period, her goals for the rest of the year – and why she couldn’t eat fish and chips with her grandparents.

What have the last few months been like for you?

Lockdown started for me with the cancellation of the Strade Bianche. That was the first race I was supposed to be taking part in, so it was a bit surreal.

When it was postponed, I didn’t realise that would mean the whole of the spring cycling calendar would be cancelled. It was weird because you train throughout winter to make sure you’re in peak physical condition and suddenly you’ve got nothing to do!

That’s why I carried on training during the period in which I would’ve been racing and continued to follow my usual routine. For example, I was due to take a mid-season break in May and I still took it, because I felt like that was mentally the best option. I wanted to pretend the season was progressing as normal.

This meant I could stay focused and spend more time in Yorkshire. Philip [Deignan – Lizzie’s husband, ex-pro cyclist and now coach] and I came back here at the start of lockdown because we knew that, if the worst were to happen, we were close to extended family. It’s been strange not being able to see family as often as we normally would, but we know where they are if we need them and vice versa.

What have you been up to since being back in Yorkshire?

We’ve had a few garden gatherings thanks to the easing of restrictions and the weather being really good at points.

I had my grandma and grandad round and they brought fish and chips. I absolutely love fish and chips, it’s my favourite meal, but the last time I had it I got horrific food poisoning. So, sadly, I couldn’t quite face it – I just had a sandwich!

In terms of training, I’ve ridden the Worlds course several times along with the Tour de Yorkshire routes. As cyclists, we’re fortunate that exercise never got banned in the UK like it did in other countries. The government clearly recognised how important it is for a person’s mental health.

I’ve been very lucky, because I’ve got teammates in France and Italy who haven’t been allowed to exercise outside. I would’ve been on full lockdown had we stayed in Monaco, so I feel grateful every time I can go out on my bike and feel the wind on my face. It definitely gives me that extra level of motivation.

Can you give us some insights into your training schedule? What’s it looking like at the moment?

I’ve cut back a bit on training because there’s no point being as lean or fast as possible when I’m not going to be racing until autumn.

I’ve reduced my training volume by about 20%. Most days, I’ll spend between three and five hours on the bike, and I’ll have one or two rest days a week. I’ve essentially dialled back to more traditional, winter-style training.

I’ve also started doing more gym and resistance work. I’ve been working on my strength and flexibility, which sometimes I’m too fatigued to concentrate on when I’m racing, so it’s been good to have extra time to focus on that.

Since Philip retired, I’ve been training with him and that’s been going really well. He details all of my training and has given me a very flexible programme because he understands the pressures of being a parent.

Weighing everything up, do you feel that the lockdown has given you an opportunity to come back even stronger?

Initially, I was disappointed because I’ve spent so long being so focused on being the best I could be for an event in July. Now, I’ve got to maintain the same levels of focus and drive for another 12 months.

But once I had a chance to reflect on everything, I was able to think positively and decided to make the best use of my time.

I see this period as a bonus. It’s helped me focus on my strengths and work on my weaknesses and it’s given me the perfect opportunity to catch up on the time I lost when I was pregnant. Last year, I came back from maternity leave in April and it took until the autumn for me to feel like I was back on my feet.

This period’s also made me really grateful that I ride a bike for a living and that, because of this, my family is financially secure. I’m not in a vulnerable position work-wise – I’m in a secure job, which thousands of people aren’t. So, in terms of the lockdown, I’m one of the lucky ones.

Getting to spend more time with Orla must be another silver lining of this situation?

Yeah, it’s been amazing. I think it’ll be quite be difficult when I go back to racing, because Orla’s become very used to seeing me and her Dad. It’ll be nicer when things have got back to normal and she’s become used to me going away and coming back again, but initially I think it will be hard. Kids are adaptable, though, so I’m sure she’ll soon be back to prodding other kids in the playground in no time! 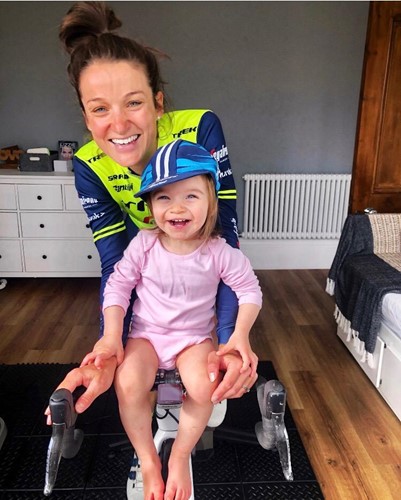 She’s certainly been the centre of attention among the family! It’s been quite funny because she’s been learning certain words and when we’re out and about, she shouts ‘People!’ whenever she sees passers-by. They’re almost untouchable, mythological figures to her at the moment.

You’ve long been an advocate for women’s cycling. How do you feel that it will be affected by this pandemic?

So far, the signs are good. Most teams are secure and some are even getting new sponsors on board, so there’s still lots of growth which is exciting.

We were all very surprised to see that the new calendar has the first ever women’s edition of Paris-Roubaix on it. That was like – wow! Even in a pandemic year, progress is still being made.

Having a women’s Paris-Roubaix is massive – I think it’s a real turning point in cycling. We’re talking about one of the most iconic events in men’s cycling which attracts thousands of fans and massive commercial partners and sponsors. Being able to showcase women’s cycling on this kind of stage is exactly what it needs.

What are your targets for the rest of the season?

Competing in the Giro Rosa is definitely up there in my list of targets. That’s more of a team goal because I’ve never been able to compete in the event and I’ll be there in a key support role.

As for other targets, I’m looking ahead to the Amstel Gold Race and Liège–Bastogne–Liège. Then, of course, there’s the Tour of Flanders, which holds a special place in my heart.

This event will be important because it gives me another opportunity to ride on cobbles ahead of the Flanders World Championships next year. I’d have to say this is my favourite race and the one I’m most looking forward to.