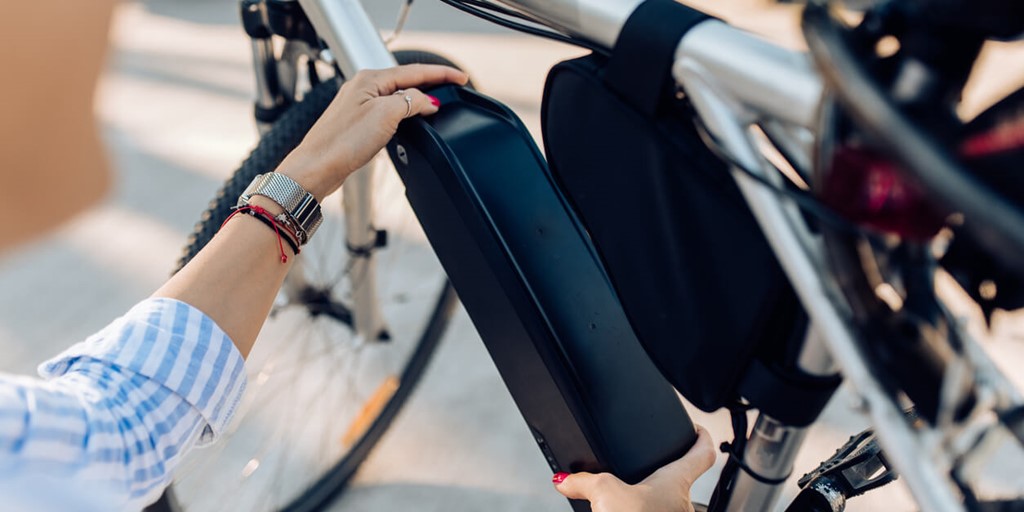 If you’re fortunate enough to own an e-bike, you’ll know that buying and maintaining them are both hefty investments.

Although some of the highest-spec e-bikes won’t leave you much change from a £15k cheque, this doesn’t appear to be hindering their rapid rise in popularity.

Even in light of the pandemic, bike manufacturers globally are facing a notable shift in focus. But with such high prices, tech and production value comes the increased risk of theft.

Though we don’t like to say it, e-bikes are a prime target for opportunist thieves, perhaps only second to cars as far as vehicle theft is concerned.

However, you needn’t let fear of theft stop you from first buying an e-bike and then riding it. Read on to learn how to secure your e-bike and protect it from thieves in 6 easy steps.

1. Invest in a sturdy lock
2. Leave it locked in a well-lit area
3. Mix up your routine
4. Take the battery with you
5. Install a GPS tracker
6. Camouflage your e-bike

1. Invest in a sturdy lock 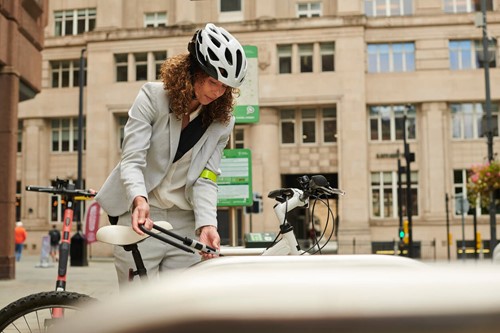 Your e-bike has likely cost you thousands of pounds, so why would you scrimp now and protect it with a substandard lock?

Keeping your e-bike secure and knowing which locks offer the best level of protection is vital. Locks come in various shapes, sizes and types:

Though some of the best bike locks can be rather expensive, it’s more than worth it when you consider it against the cost of replacing a stolen bike!

Don’t be fooled into thinking you can only use one lock at a time, either. Using a combination of locks for various parts of your e-bike can actually act as a further theft deterrent.

A well-made bike lock requires power tools and a lot of time to break into, so by investing wisely, you can be sure you’re doing all you can to keep thieves at bay.

2. Leave it locked in a well-lit area 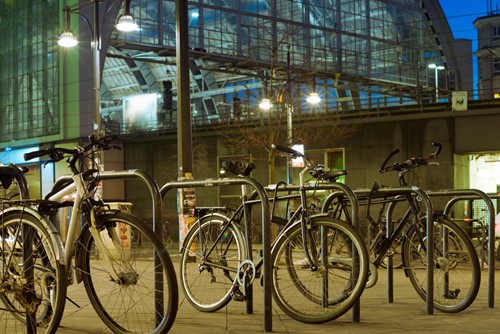 As simple as it may sound, leaving your e-bike in a well-lit area is one of the best things you can do to protect it.

If you need to park up somewhere for the night, in particular, try and stick to areas with good visibility where possible, preferably directly underneath a streetlight.

Thieves mostly like to operate in darkness and not in places they could easily become the centre of attention, so leaving your e-bike under a large bright light on a relatively busy street works as a solid deterrent.

While you might think that locking up your e-bike down a quiet alley or backstreet is safe because there are fewer people about, doing this plays right into the hands of a thief.

Quiet alleys are also far less likely to have CCTV in operation, too, so the chances of tracking down thieves here become even slimmer still.

3. Mix up your routine 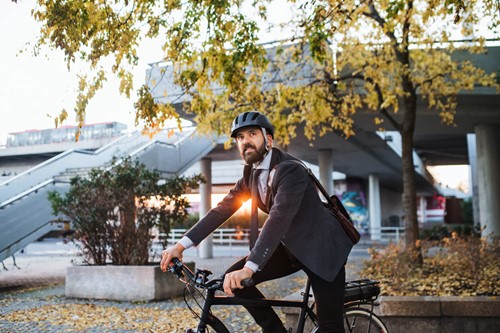 One security tip you perhaps might not have considered is mixing up your e-bike routine. In a nutshell, this can make you less predictable for the eagle-eyed.

To safeguard properly against theft, you must first think like a thief.

Studies have shown that thieves like to study people’s behaviour patterns over time. This is so they can try to predict where you’re going to be (with or without your bike) and when, and hence know where and when to pounce.

So, firstly, if you have a commuter e-bike that you ride to and from work every day, try and think of ways you can mix up your routine.

If you live close enough to your workplace, consider whether you could travel on foot or via public transport from time to time to break the pattern and make it harder for onlooking thieves to target you and your bike.

Just make sure your bike is safe and secure while you’re away!

If cycling is your only viable way of getting to and from work, try to vary where you lock it during the day so that thieves can’t easily clock onto your habits.

Related: Bike thief reveals tricks of the trade in this shockingly candid interview

4. Take the battery with you 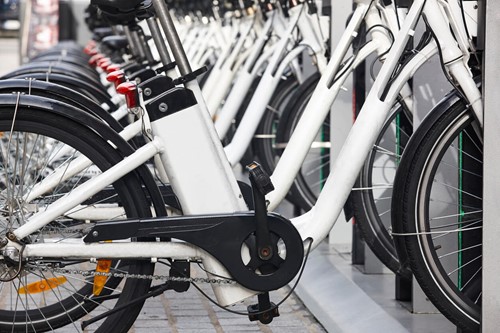 E-bike batteries are the most commonly stolen part of an e-bike.

Given that most e-bike batteries are designed for an easy slide-on and off, you need to make sure you take your battery with you if you’re unable to lock it individually.

The battery is often one of the most expensive and valuable parts of an e-bike, so if it’s locked up (or better still, not there at all), the bike becomes instantly less attractive to thieves.

Related: A guide to e-bike batteries 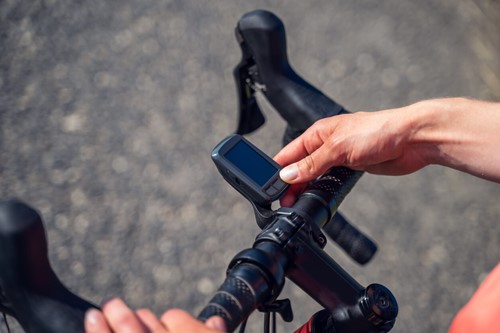 Although manufacturers like VanMoof have started implementing GPS tracking into e-bikes as standard, many don’t come with this luxury.

However, the good news is that there are plenty of good GPS trackers on the market that are perfect for your e-bike.

Trackers can be fitted just about anywhere on the bike itself and work similarly to other types of Bluetooth devices. By sending out a digital signal that you can track via a corresponding app on your smartphone, you can keep tabs on your e-bike at all times.

Of course, the true test of a GPS tracker’s quality is when it’s called upon for real (i.e. when you think your bike’s been stolen and you need to trace its location).

Obviously, you’d rather not be in this position, but by installing a GPS tracker, you can rest assured you’re taking those all-important, extra precautionary steps.

Some GPS trackers will also send out an alert if it senses your bike being tampered with, or sound an alarm to scare away would-be thieves.

Our sixth and final tip for securing your electric bike is the most creative by far.

Camouflaging your bike via a process sometimes referred to as ‘uglification’ is a step you may not have otherwise considered – until now.

The aim of the game here is to make your e-bike look less desirable to thieves. And, though you might not particularly fancy ‘vandalising’ something that’s set you back thousands of pounds, ‘uglification’ can be an effective deterrent.

Uglification techniques range from wrapping the saddle and handlebars in masking tape and scuffing the handgrips to spraying on fake rust and random paint splashes.

Besides their price point, e-bikes are visually appealing too. Their slick, sharp appearance is often what makes them stands out from the crowd in the eyes of a thief, so anything you can do to stop yours standing out will reduce the chances of it being stolen.

The last thing you want is for your bike to scream, “Look at me! I’m brand new and expensive!”

But, of course, you’ve got to be willing to compromise that desirable e-bike aesthetic.

Related: 5 Creative Ways To Protect Your Bike From Theft

Sadly, no matter how well you protect your e-bike, the reality is that it’ll always be a target for thieves.

That’s why you’re putting yourself at huge potential risks by not having the right insurance.

At Cycleplan, our specialist electric bike insurance protects your e-bike against loss, theft and accidental damage up to the value of £30,000, so you can ride and store your e-bike with complete peace of mind.

We also offer Public Liability up to £5m and protection against personal injury. Our policies are also underpinned by our very own ‘Ripe Guarantee’, meaning you won’t find a better price for your electric bike insurance anywhere else on the market.

Learn more about our specialist electric bike insurance here and get an instant online quote today.

Why Cycling Is Good For The Environment