“Manchester was brilliant, everything we could possibly want was there, the velodrome was our ‘manor’…it was a home from home.” Sir Bradley Wiggins, 2008.

cycleplan took a trip down memory lane last week at the Manchester Science and Industry Museum. The MOSI's new Pedal Power exhibition (on until March 2015) brings together the history, the people and the technology of the sport to help explain how Manchester’s prowess in engineering led it to be at the forefront of early bicycle production.

Manchester is now commonly referred to as the capital of British cycling as it’s the home of British Cycling. And as cycleplan is a Manchester based company, it seemed only fitting that we visited this exhibition and learnt a little bit more about Manchester’s early cycling heritage.

The UK’s first velodrome was opened in Fallowfield, Manchester in 1892? Which means Manchester’s been a hub for cycling long before the opening of the current Manchester velodrome twenty years ago.

At the exhibition, I learnt more about local cycling hero Reg Harris (1920-1992).  Harris , from Bury in Lancashire, won the world amateur title in 1947, before going on to win the world professional sprint title four times. Harris also broke five world records in his glittering career before retiring in 1957.He later became a cult hero of British Cycling by making a comeback 30 years after his first national amateur championship, winning the professional title in Leicester in 1974, aged 54. 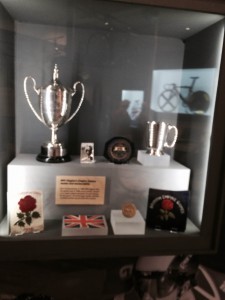 For me, the highlight of the exhibition was a simulation of a 200m lap of the Manchester Velodrome.  I was a whole 7 seconds off the world record set by Francois Perviz in December 2013 in his lap around the famous track.

It was also amazing to see close-up the bike Victoria Pendleton rode in the London 2012 Olympic Games to so much success.  The bike is beautifully displayed in a glass case, as seen below.

For any cycling enthusiast, if you’re in Manchester before March, it’s definitely worth visiting the Pedal Power exhibition.  And it’s a cheap day out as the whole Science and Industry Museum is now free of charge to the public.

Also when at the museum, you are not too far away from another couple of great locations for cycling enthusiasts; just around the corner from the museum are shop, which sells some of the finest bikes and where you can watch the experts at work in the open plan workshop.

Also in walking distance is the newly opened Rapha Cycle Club, the brand’s only UK store outside of London.  As well as the shop, there’s a café and a gallery space celebrating the culture of cycling.  Manchester’s cycling heritage is certainly alive and kicking right up the to present Day.